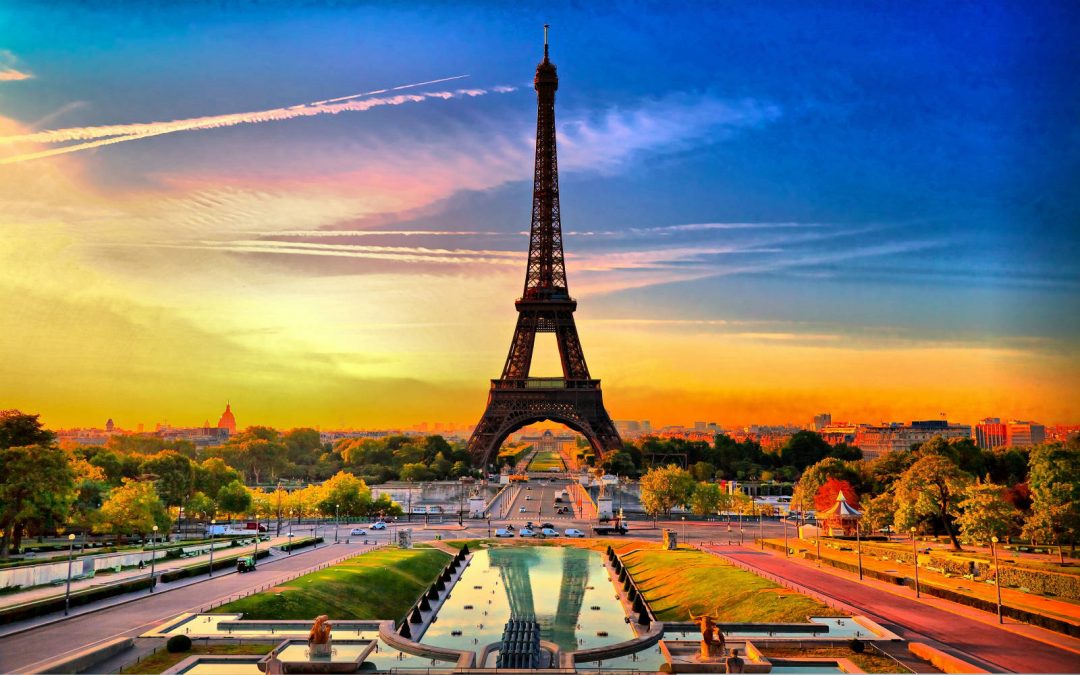 This is a guest article contributed by Trip101.

There’s nothing quite like visiting Europe and immersing yourself in the wondrous sights that this ultimate travel destination has to offer. From stunning medieval castles to unforgettable festivals, and breathtaking natural landscapes, there’s plenty to do and explore as you embark on your European adventure.

Europe is also the perfect place for you to strike off things on your bucket list. From getting smashed with tomatoes to gazing at the Eiffel Tower, the list is endless. We’ll get you started on your bucket list with these 10 experiences that you must do while visiting Europe. 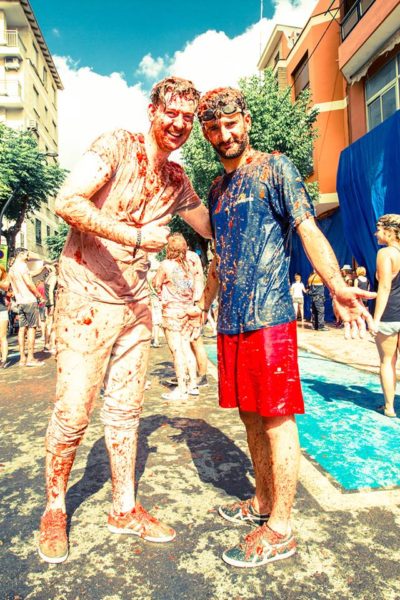 While there are plenty of fantastic festivals in Europe, there’s nothing quite like the Spanish festivals. The Spanish know how to do their fiestas right, and you’re sure to have an amazing time. One of Spain’s most important holidays is Semana Santa which is the Holy Week that precedes Good Friday and Easter. During this week, there are carnival-like street processions especially in Sevilla around the Andalucia region.

Alternatively, check out La Tomatina, which is a popular festival in Spain that incorporates tomatoes. Every last Wednesday of August, individuals head to a small town in Spain called Buñol where a massive food fight begins. There’s nothing quite like the experience of thousands of people from all over the world throwing around tomatoes. While the ‘fight’ may just be for a couple of hours, the party doesn’t end there, and you can head to the official La Tomatina after party to continue with the festivities.

Another popular festival is Las Fallas which falls in March and celebrates the arrival of spring. You’ll be enthralled by the towering cartoon-like installations called Fallas, along with the puppets that accompany them. To keep it fresh and interesting, every year also has installations with different themes.

2. Bask in the Magical Beauty of Neuschwanstein Castle (Germany) 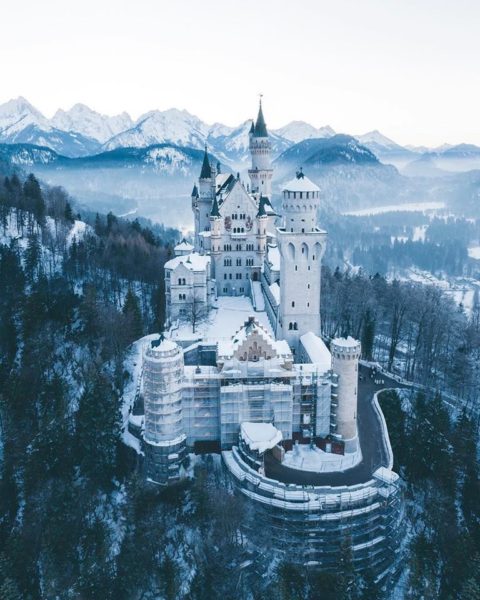 If you’re looking to immerse yourself in a fairytale, there’s nothing quite like the Southeastern region of Germany that’s home to some of the region’s most beautiful castles from the medieval era. While there are a few castles that you can visit, there’s nothing quite like the Neuschwanstein Castle. After all, this was the castle that inspired Walt Disney to create the Magic Kingdom.

The castle was built by King Ludwig II of Bavaria in the 19th century, and he was a fan of Richard Wagner – a world-renowned composer. Hence, the interiors, as well as the rooms, were built in his honour and inspired by Richard Wagner’s characters. The interiors are stunning, and you’re sure to be blown away by the décor. Surprisingly, the castle also has rather modern technology for that era with air heating systems and automatic flushing toilets. 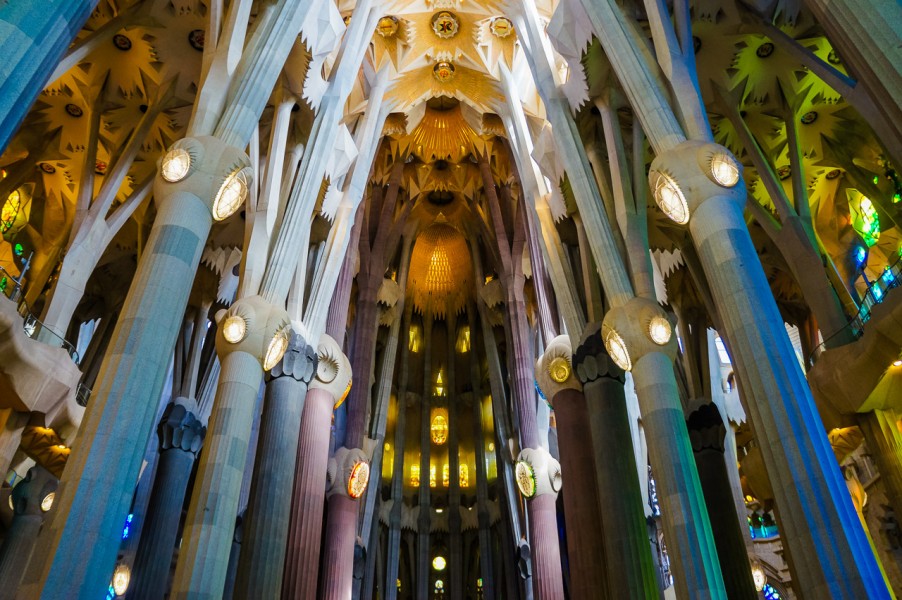 The La Sagrada Familia is one of Antoni Gaudi’s most popular masterpieces and it’s not even finished yet. With glittering stained-glass windows, along with towering columns and intricate details in this magnificent structure, this incredible church is sure to take your breath away. With over 4.5 million visitors taking in the grandeur of La Sagrada Familia, you’ll need to plan ahead to make sure that you don’t end up being swept up in the crowd.

For tickets, it’s best to purchase them online to secure your spot. Not only are tickets online usually cheaper, you also won’t need to wait in line with everyone else, and will be guaranteed a spot. Alternatively, you can purchase the Barcelona City Pass which includes express entry into the La Sagrada Familia, and other extras. Make sure you adhere to the time on the ticket as well as tickets are allocated based on 15-minute time slots.

Aim to visit the La Sagrada Familia mid-morning to mid to late afternoon as you’ll have stunning views of the light piercing through the large stained-glass windows.

4. Take a Gondola Ride in Venice and Admire the View (Italy) 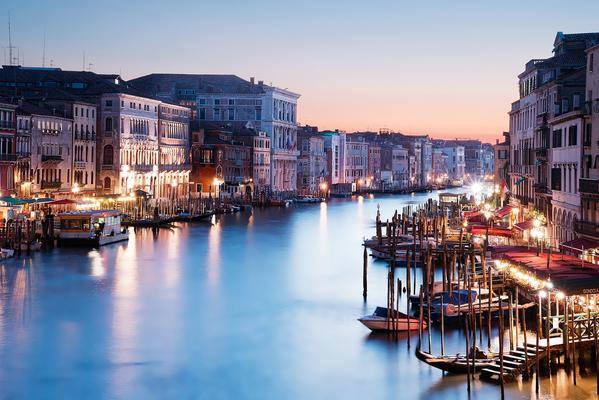 Think of Venice and you’re sure to imagine meandering canals amongst a picturesque backdrop. While in Venice, you’ll definitely have to take a ride on one of the Gondolas down the Grand Canal – a 3km strip of glistening water that passes along bridges, bustling markets, restaurants, iconic structures, churches and more.

There are plenty of ways to cruise along the Grand Canal depending on what you’re in the mood for. If you’re with your significant other, you may want to look at a gondola ride with a romantic serenade and dinner under a magical evening sky. Alternatively, you can do a Grand Canal gondola ride with a serenade, or an audio-guide.

As you take a ride along the Grand Canal, don’t forget to look out for some of Venice’s attractions including the Santa Maria Della Salute, Ca’ d’Oro, and San Stae. 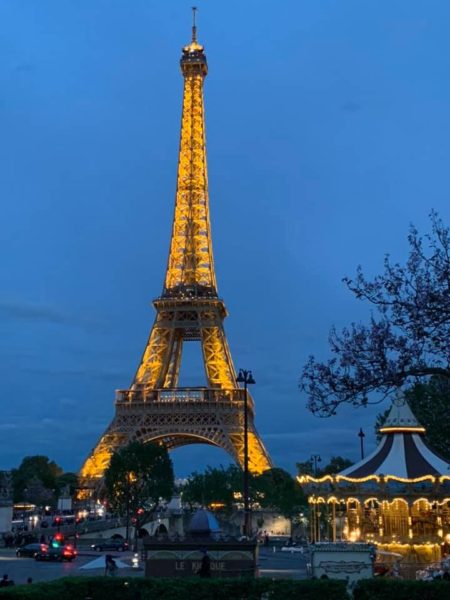 While many tourists flock to Paris, France to take a picture of themselves standing in front of the Eiffel Tower, there’s nothing quite like getting to the top and taking in a view of the city. The Eiffel Tower itself attracts more than 7 million visitors every year and has three platforms that house two restaurants, gift shops, and even a banquet hall and champagne bar.

You can choose to either take an elevator or take the steps up to the top of the Eiffel Tower. If you’re taking the lift, expect long lines as this attraction is incredibly popular. Alternatively, you can climb 704 steps up to the top. While it’s less crowded, you’ll also need to work for your view.

Unbeknownst to most, there’s also a secret apartment located at the top of the Eiffel Tower that was built by Gustave Eiffel as a private apartment to himself. When you head to the Eiffel Tower, remember to take a look at the apartment as it is available for the public to tour.

6. Soak in a Thermal Bath in Budapest 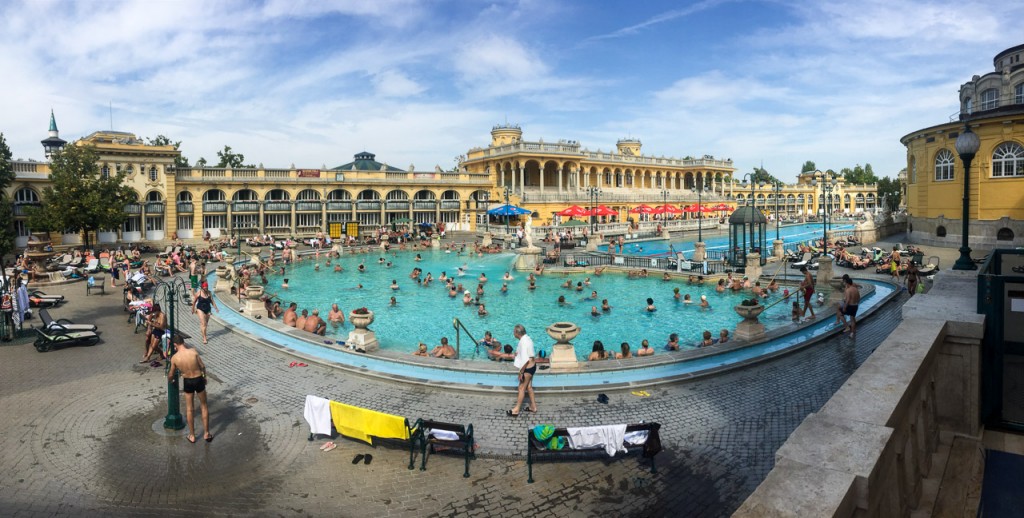 You can’t go to Budapest without soaking in a thermal bath. After all, for 2,000 years, people have flocked to Budapest for the healing power and medicinal properties of the baths. Known as the City of Spas, many of the baths in Budapest date back all the way to the 16th and 17th centuries. There are a variety of thermal baths from those that you’d use for relaxation, to those for whirlpools and parties.

The most popular thermal bath in Budapest is the Szechenyi Thermal Bath. It’s also one of the largest in the world, and you’re sure to find both tourists and locals alike enjoying the warm waters. Szechenyi Thermal Bath was also built in 1913 and houses 21 thermal pools, as well as a sauna, steam rooms, and aqua fitness. If you’re feeling a little adventurous, you should also check out the thermal beer spa.

Either than Szechenyi Thermal Bath, there are also plenty of other thermal baths to explore from Rudas Bath to Kiraly Bath, the options are endless.

7. Go Back in Time in Athens, Greece 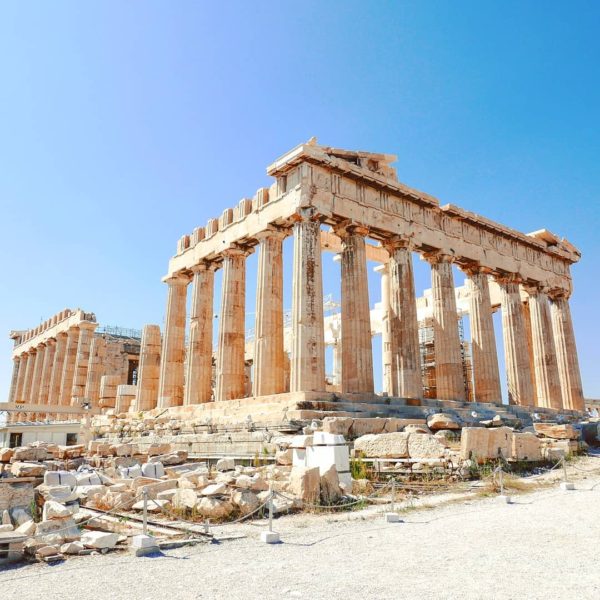 There are very few sights in the world that can compare to that of the Acropolis located in Athens, Greece. You’ll be in awe of the Parthenon temple that’s perched on the top of rocky terrain. Around 447BC to 338BC, the Parthenon was located in the centre of the ancient city and functioned as the core fortified area. The sturdy columns along with the stunning sculptural details are certainly a wondrous sight.

With over 2,500 years of history, the monuments located in the Acropolis are considered to be some of the greatest architectural feats. The Parthenon temple itself is known to be one of the finest Doric pieces and was dedicated to the goddess Athena.

Other than the Parthenon, there are also other ruins such as the Erechtheion that was built between 421 BC and 395BC. You’ll be able to see the Porch of the Caryatids which has six statues of maidens replacing the columns. Don’t forget to also pay a visit to the Acropolis museum that has some of the most valuable collections of ancient Greek art.

8. Transport Yourself to the Colosseum in Rome 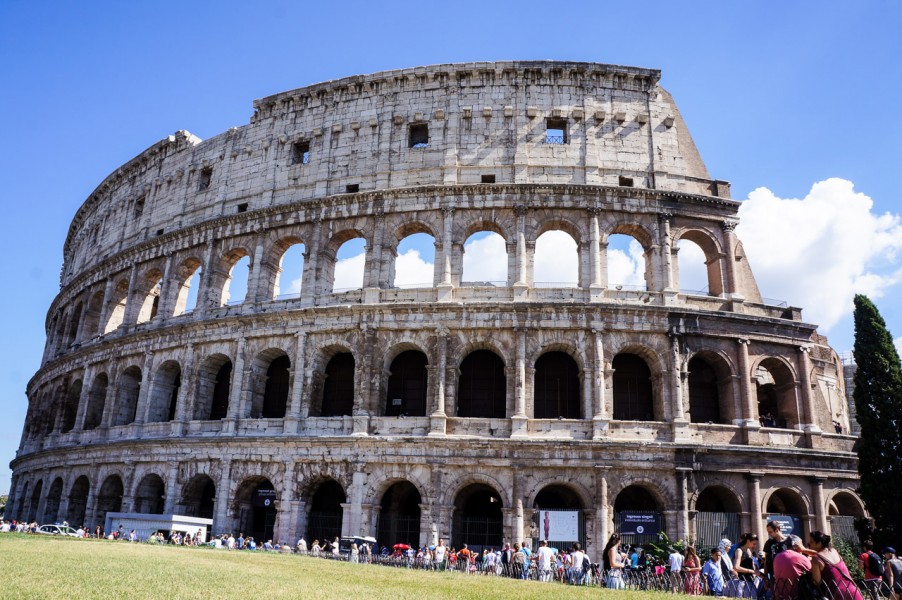 When you’re in Rome, The Colosseum is an attraction that you must not miss. It’s the iconic image of Rome that has been printed on postcards, famous magazines, and featured in many popular movies. The Colosseum is located in the heart of Rome, and was constructed in 72AD under the rule of Emperor Vespasian, and was completed in 80AD. While the Colosseum was used in many different ways, it’s most well-known for hosting gladiator fights.

Since the Colosseum is an incredibly popular attraction, it’s best for you to book your tickets online so you won’t have to queue up in the long lines. Since the Colosseum is such a vast structure, it’s easy to be overwhelmed and miss out on the important parts. While you’re inside the Colosseum, remember to head to the arena floor and the hypogeum.

Remember to allocate a whole day to see the Colosseum as your ticket also includes admission to the Palatine Hill and the Roman Forum. 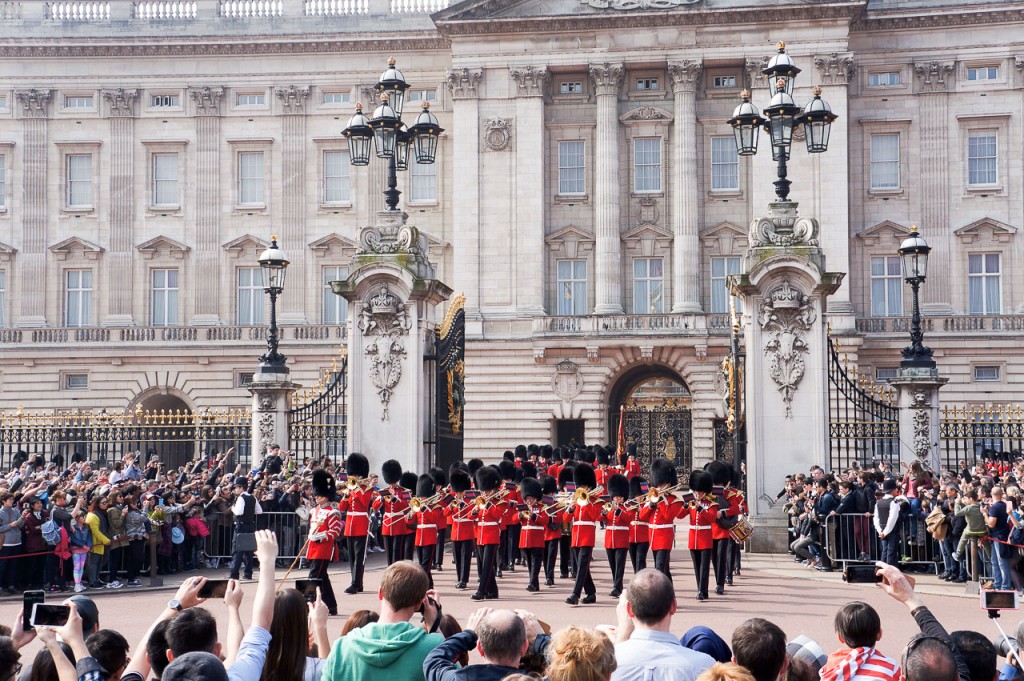 Other than Big Ben, The Tower of London, and the London Eye, London’s Buckingham Palace is another iconic attraction. The palace itself is more than 300 years and has a total of 775 rooms, with only 19 available for the public’s exploration. One thing most individuals visiting Buckingham Palace tend to forget is that the palace isn’t always open. Buckingham Palace is generally open to the public between July 22 and October 1. During this period, you’ll have access to the 19 State Rooms as well.

Exploring Buckingham Palace should take no more than two hours. Your admission ticket will also include an audio tour and access to the Royal Gifts exhibition of that year. If you’d like to check out the lush green gardens, remember to add a Garden Highlights Tour to your ticket.

10. Take in the Fresh Air at the Swiss Alps 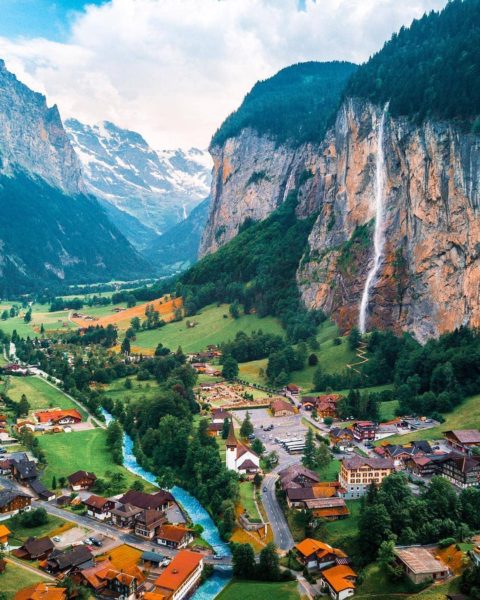 There’s nothing quite like the scenery in Switzerland. Depending on the season you choose to visit, you’ll either be graced by rolling lush green hills, or icy mountains filled with a fresh pillow of snow. With unforgettable scenery, hiking trails, and memories to last you a lifetime, you’ll have to visit this spectacular mountain range crossing.

The Swiss Alps are incredibly vast and dotted with plenty of towns. If you’re short on time, you’ll have to explore the jaw-breaking beautiful town of Lucern that’s covered with lovely wooden bridges, and quaint buildings. Other towns that you wouldn’t want to miss include Zermatt with incomparable views of the Alps, and Montreux that provides breathtaking views of Lake Geneva.

These are just 10 things that you can strike off from your bucket list by visiting Europe. There are, however, many more things to do, and plenty to explore. From exploring the architecture of Gaudi in Barcelona to immersing yourself in the scenery of Switzerland, the opportunities are endless. For more destination guides and accommodation reviews, check out Trip101 or our travel guides page