9 Reasons Why You Need to Visit Zadar, Croatia 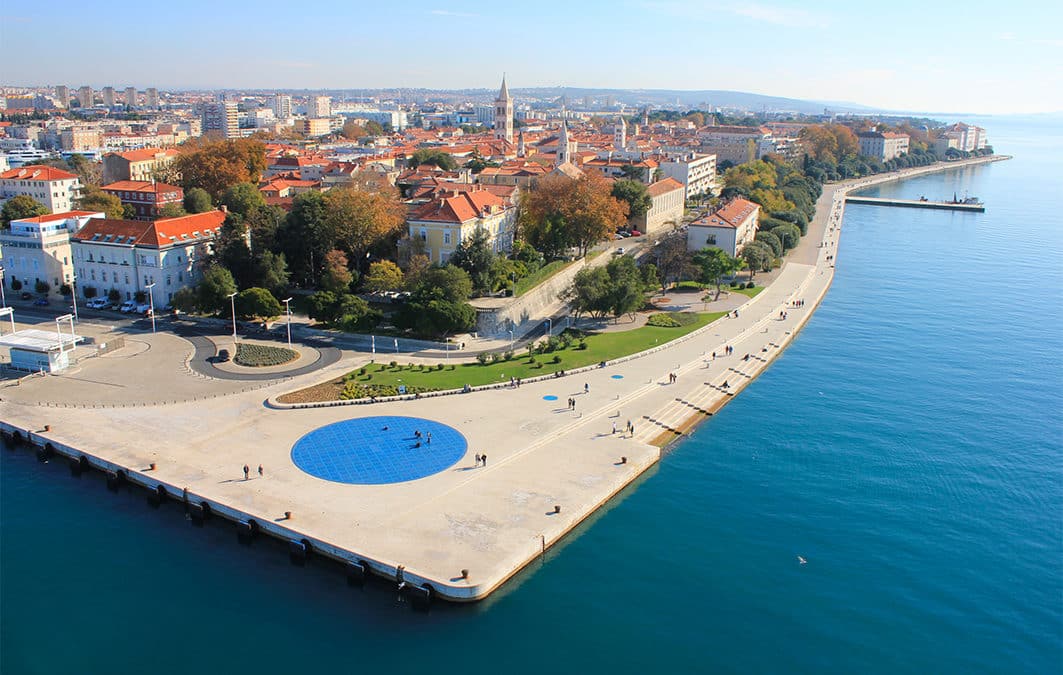 This is a guest article by Anna & Roger of RogerWillTravel.

There’s no lack of stunning cities in Croatia, and it can be difficult deciding which ones are skippable and which aren’t. Zadar is one of the cities that’s not skippable, and which should be really high up on your list.

It boasts medieval buildings, contemporary monuments and breathtaking views. It’s the smoothest blend of ancient and modern in Croatia, which is one reason why you should definitely visit it. And in the rest of this article, we’ll bring you seven other reasons why Zadar should be your next stop!

Zadar is the best town to stay at if you’re interested in exploring the region of Northern Dalmatia. It’s a beautiful city, located about an hour away from some of Croatia’s best known national and nature parks, other historic cities and vast islands.

Whether you’re looking to explore the untouched nature of Croatia’s vast parks or go on a slalom ride between tiny Kornati islets, this city makes an excellent starting point.

The Land Gate marks the official entrance into Zadar Old Town, and it’s actually one of the oldest monuments in this charming city. It was originally built in the 16th century when it served as the main entrance into the town of Zadar. 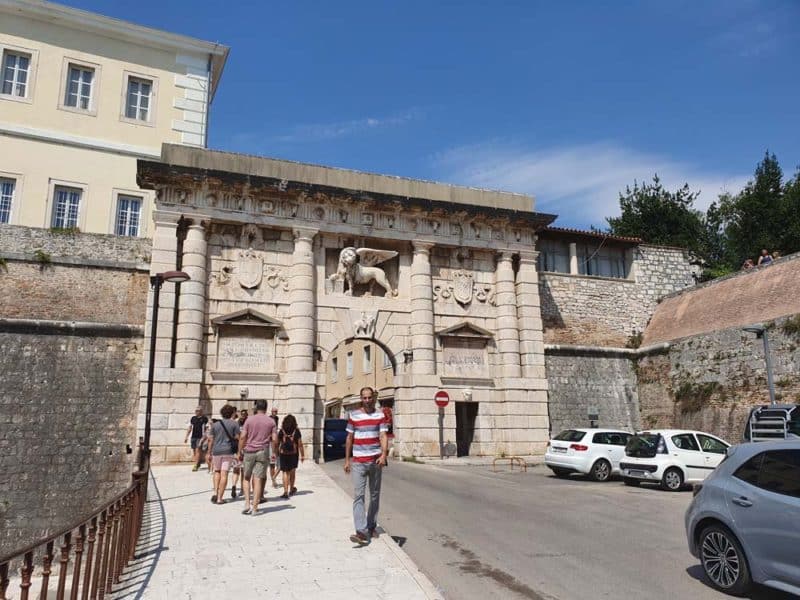 It is by no means necessary to pass through the ornate gate to enter the Old Town, but it is recommended. Especially with so many interesting attractions to see nearby – both the Five Wells Square and the Queen Jelena Madijevka Park are right there near the Land Gate, and they’re both worth a visit.

What’s most interesting about Zadar Old Town is that it is on a taller lever than the rest of the city. You will notice this once you start roaming around and realize how many steps you’re actually climbing, especially if you want to see some of the attractions that are on the edge of those Old Town walls. But don’t be scared of the stairs – the uphill climbs are always entirely worth it because they will reward you with some awe-inspiring views. So, don’t forget your camera! 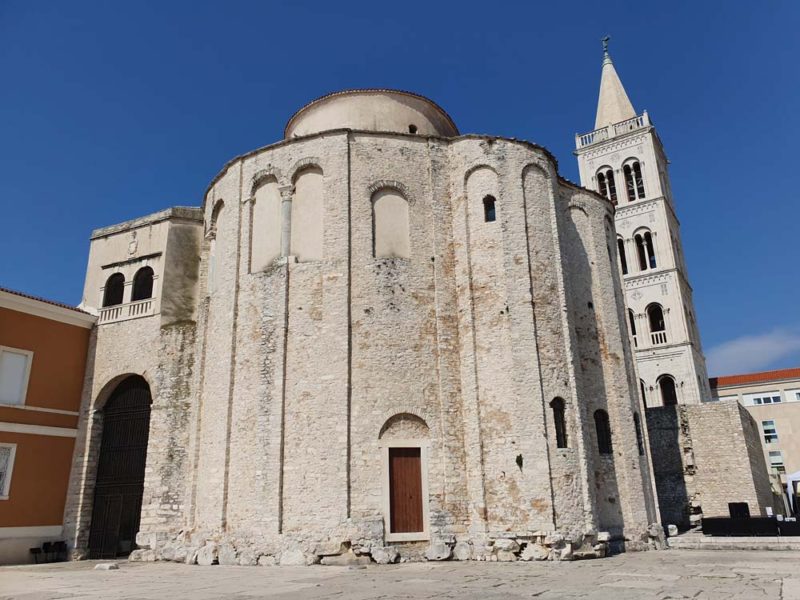 This pre-Romanesque church is absolutely massive and you can’t even begin to fathom its size until you are standing directly in front of it. It boasts a circular shape that’s typical for medieval Dalmatian architecture and it takes up the majority of the Roman forum it was built on. The 27-meter tall church has had a lot of functions in the past, from serving as a warehouse during the rule of Venetian Republic to operating as an archaeological museum during the Yugoslavian period.

Nowadays, the Church of St. Donatus is mostly used for concerts because of the outstanding acoustics of the building. It’s not a very beautiful sight – in fact, it stands out from most of the other buildings in Zadar’s Old Town because of the colossal size. However, that’s exactly what makes it such an iconic and impressive sight.

Zadar’s Archeological museum is another unique visit worth your time. The building is right opposite the church of St. Donatus and you literally cannot miss it – the modern exterior of the museum stands out like a sore thumb from the rest of the ancient surroundings. The museum boasts three stories of various Roman, medieval and neolithic artefacts, including a generous collection of statues. In fact, an entire floor is dedicated to the Roman period and you can see all sorts of statues, paintings, jewellery and other artefacts there.

The different exhibits will take you on a journey of discovering Zadar’s history from the ancient period to the modern times, with English descriptions for every single exhibit. And if you want to take home something to remember the museum by, there’s a nice little souvenir shop where you can buy all sorts of memorabilia.

The Archeological Museum is extremely interesting and educational especially for history buffs and people who want to learn more about the history of this charming Croatian city.  What you may not know, is that this museum is also one of the best places in the city to escape the scorching heats in the summer.

Zadar’s Old Town is quite small compared to the actual size of the city, so it’s incredibly interesting just how massive some of the buildings in it are. Apart from the church of St. Donatus, which is the absolute champion when it comes to size, there’s also the Cathedral of St. Anastasia – another exceptionally large church with a beautifully decorated interior.

The foundations of the cathedral date back to the basilica of the 4th and 5th centuries, but the majority of its current Romanesque exterior was built sometime in the 12th and 13th centuries. The Cathedral of St. Anastasia is also one of the places Pope John Paul II visited in 2009, which was actually one of his final international travels.

The architecture of the church is absolutely magnificent and it’s well worth your time to go inside. We recommend climbing to the top of the bell tower – it is entirely free of charge, and you will experience an astounding panoramic view of Zadar from the top.

The Sea Organ is a unique monument in Zadar that you will hear before you actually see it. It was designed by architect Nikola Bašić, and it represents an attempt to communicate with nature via sound. 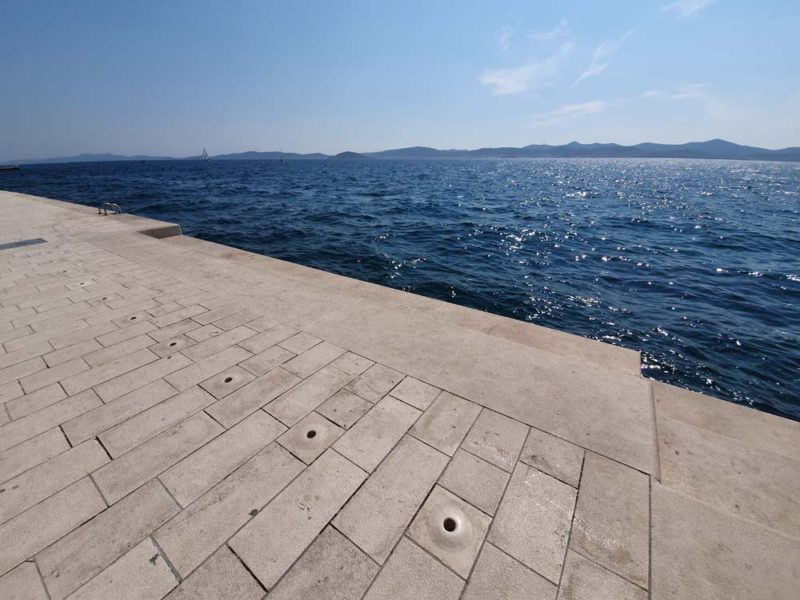 In fact, it’s really hard to actually see the Sea Organ if you don’t know what you are looking for. This unique monument consists of polyurethane tubes that are hidden behind the stone steps that descend into the sea. You can see where they are if you look at the ground – you’ll notice small openings in the stone, which is where the sound is coming from.

However, you can hear this monument when you’re much further away, practically as you’re turning the corner from the Church of St. Donatus onto the wide seaside promenade. You will hear the music that the waves are creating – the sounds are truly wonderful and chilling, especially when you stop and realize that there’s absolutely nothing human about them.

7. Greeting To The Sun

The Greeting to the Sun is a really popular contemporary monument that was designed by Nikola Bašić. It ties in with the Sea Organ both thematically and physically – this monument represents an attempt to communicate with nature via light, and it’s only inches away from the polyurethane tubes. 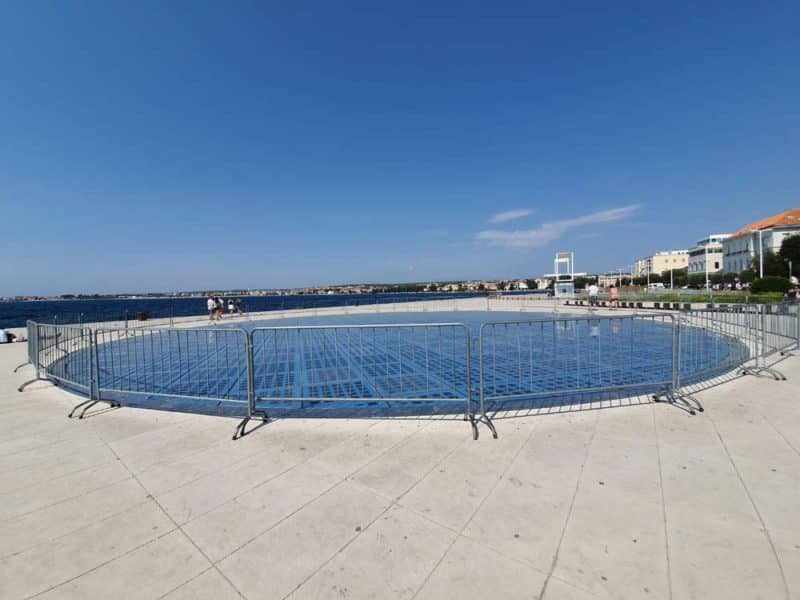 This modern monument consists of nine LED circles, which represent the planets of the solar system and the sun. The sun is obviously the largest light installation – the other circles are so small compared to the sun that they’re barely even noticeable.

While the Sea Organ is best enjoyed during the day, the Greeting to the Sun is much more spectacular in the night when it lights up. And don’t be surprised to see a fence around the light installation – it was vandalised a few times, and the repairs were pricey enough that the government decided to fence in the light installation to protect it from further vandalism.

The Museum Of Illusions was originally opened in Zagreb and it was such a massive hit that today you can find it in more than countries all over the world. 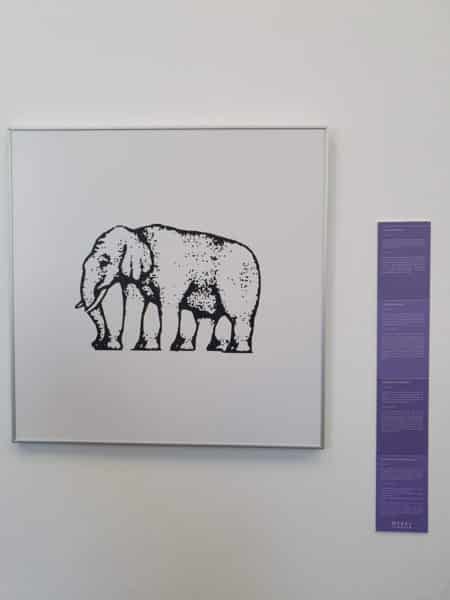 The one in Zadar was the second ever to open, and it is one of the only two museums in Croatia right now. If you can’t visit the Museum of Illusions in Zagreb, the one in Zadar is your only other option in the country.

The museum boasts more than 70 different exhibits, including a mirror room, a kaleidoscope, a vortex tunnel, an anti-gravity room and many others.

It’s possible to view all of the exhibits in about an hour but we highly recommend that you take your time and make sure your phone is fully charged – there are lots of great photo opportunities! Most of them are really unique, and you will be able to get shots of your head on a silver platter or you hanging from a ceiling holding onto a couch for dear life, so take your time and thoroughly explore this awesome museum.

The Museum of Ancient Glass is another excellent way to spend time in this gorgeous Croatian city. It is actually right next to the Museum of Illusions – if you’ve already climbed those nasty steps to the top, you might as well reward yourself with two different museum visits!

This museum is a bit of a paradox – it features a very modern layout, with contemporary displays and ancient exhibits inside them. Well, some are ancient – there are also some really modern glass pieces that you can actually take home as souvenirs! The ancient glass is the one we’re interested in – after all, that’s the name of the museum! You can see collections of Roman glass from the first and second centuries, as well as more than 5000 pieces of glass from the antique period.

You can attend unique workshops, where you can try your own hand at blowing glass. There are two workshops – one includes creating replicas of the ancient glass you see in the museum, while the other one will keep you busy by making gorgeous glass jewellery.

When you’re ready to leave the museum, don’t just run out the front door. Make sure to stop by the garden first – it’s an excellent spot for an impromptu photoshoot, with a beautiful green lawn, modern sculptures and scenic marina views.

Author bio: Anna was born to travel the world having studied languages all her life. Although she has travelled the world, she now calls Switzerland home and spends her time writing about her experiences on Expert World Travel. You can follow her on Facebook, Twitter and Pinterest