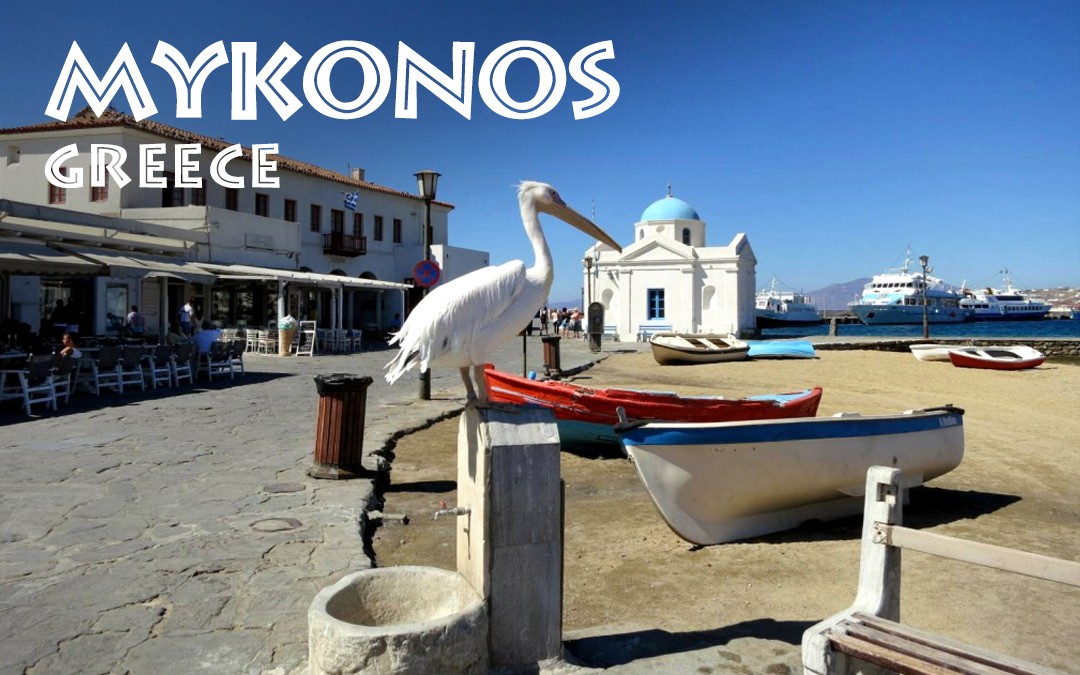 Island hopping through Greece has been on our list of things to do for quite a while now so when the time came, we were really excited. What wasn’t there to be excited about… drink, eat, explore, beach, party, sleep, repeat!

We visited 4 Greek islands in the space of 3 weeks; Mykonos, Santorini, Ios and Paros. Every one of them was different and fun in their own ways, but our favourite had to be Ios. We will be doing a blog post for each island but here is a quick rundown of what each island is about:

Tips for travelling in the Greek Islands

If you plan to visit in high season (Jun-Aug), definitely pre-book your accommodation and ferries.

It’s best to pre-book your ferries through Ferry Hopper. You’ll get a list of the different companies, times and prices and can save your personal information for a faster checkout each time. The Flying Cat 4 ferry is the well known fast ferry and Blue Star Ferries is almost like a cruise liner – slower but very spacious!

Also, expect to hear many Aussie accents. Australians take over the Greek islands in the summer months, especially in Mykonos and Ios. The Australian flag even flies outside some of the restaurants and beaches.

We weren’t sure what to expect from Mykonos but it turned out to be quite a big party island and a lot of fun. In terms of prices, this was on the higher end compared to the other islands (except at the Paradise Resort). We mainly stayed in one self-contained party resort, at Paradise Beach, as described below. 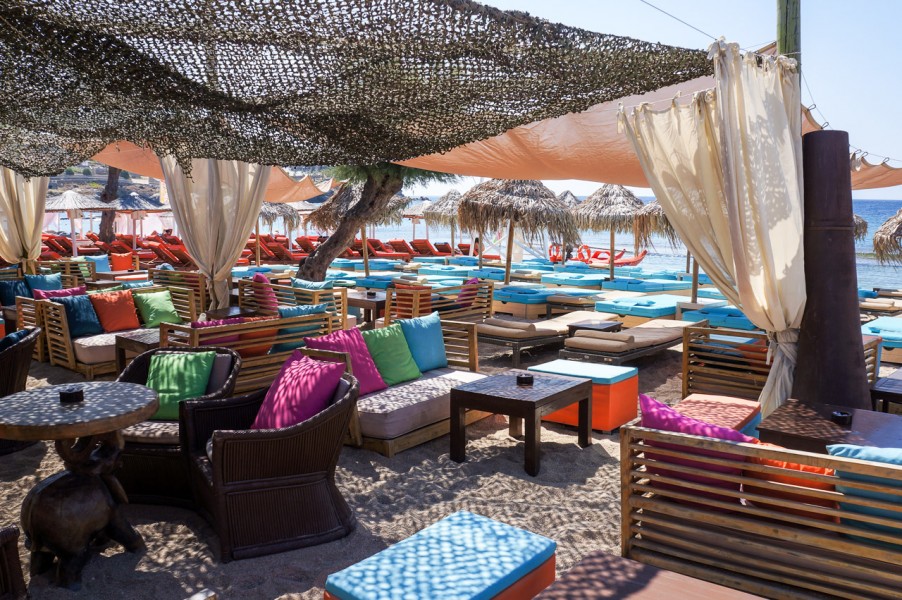 We stayed at Paradise Beach Club & Resort which is its own self-contained village. There are mini shops, markets, bars, restaurants, beach, accommodation and clubs. All you need is right there and within a few minutes walk.

The resort caters to any budget. You could go as cheap as bringing your own tent or as high as renting a suite room. We opted for the budget basic room that consisted of two single beds, a side table a door and a fan. It did the job but unfortunately, we did have shared bathrooms that were a little questionable but otherwise it was fine.

Book a Hotel in Mykonos

The bus into town from Paradise Beach costs 1.60 Euro and is a 20-minute drive. Whilst there is plenty of accommodation in town we wanted to stay right on the beach. It is very common and easy to rent ATV’s or scooters, and there are ample places to do so. 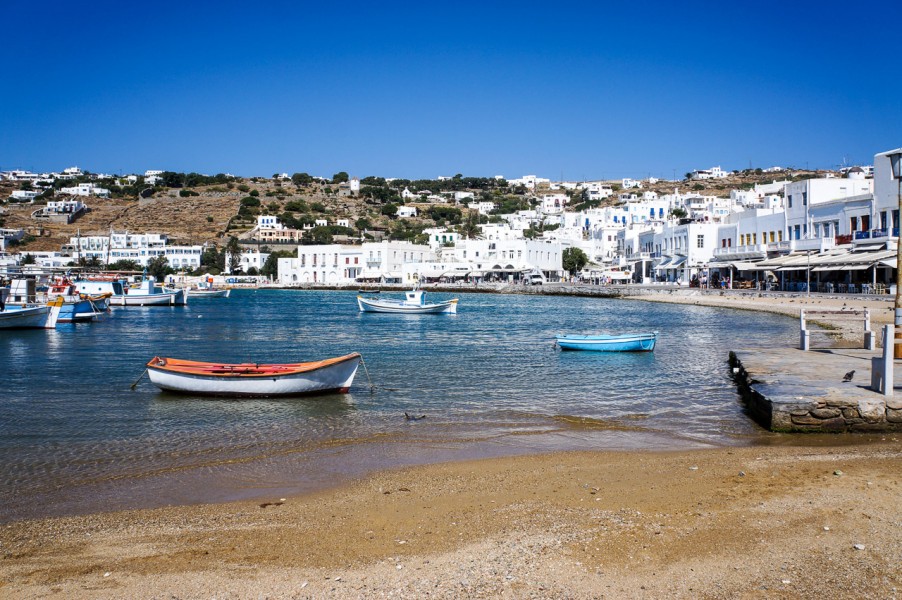 Being it the first time in Greece we loved the classic blue & white coloured buildings, which made everything so picturesque. There were many narrow alleyways to explore with boutique shops, restaurants and an occasional roaming pelican (Petros) that walks around town like a human. Emily thought it was a dressed up child in a costume.

On one occasion in town, we went to watch the rugby league State of Origin final at an Aussie pub with many other Aussie supporters. Jacob’s team (Queensland) won by a record score of 54-6, which was very embarrassing for the New South Wales supporters.

Partying in the Mykonos Summer 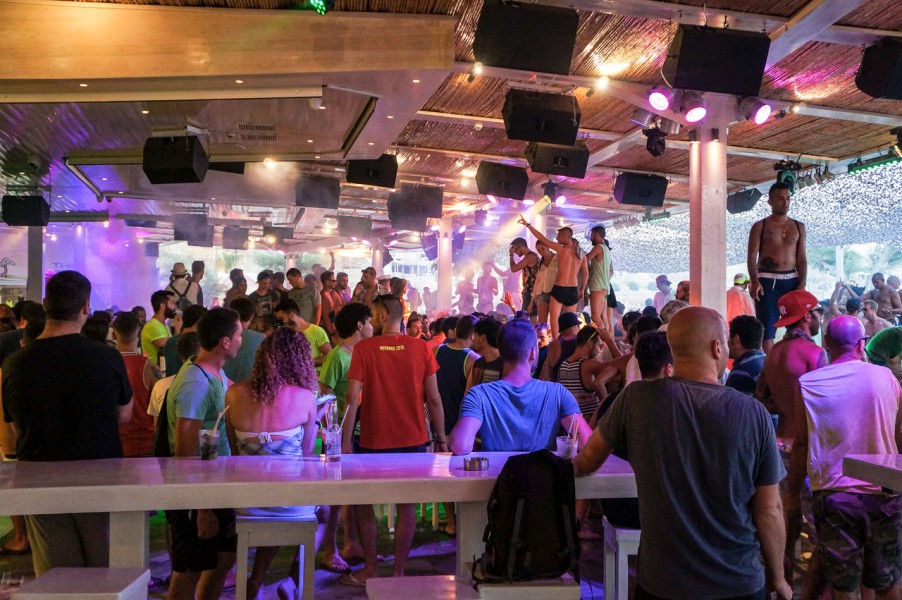 When arriving at our hotel at 8pm on Monday evening, the parties were already in full swing. They have 2 clubs (Cavo and Paradise Club) right on the beach which are rated #15 & #17 in the world and during the summer months they have all the headline DJ’s playing.

Also at Paradise Beach Resort is the Tropicana Beach Club which has daily beach parties from 4:30pm-12am. They are filed with busloads of partygoers from well known tour companies & cruises (Contiki, Busabout, etc)

We had an awesome few nights out here with a huge group of Aussies, surprise surprise.

Tips if you stay at Paradise Beach Resort

Here are more things to do in Mykonos, Greece. 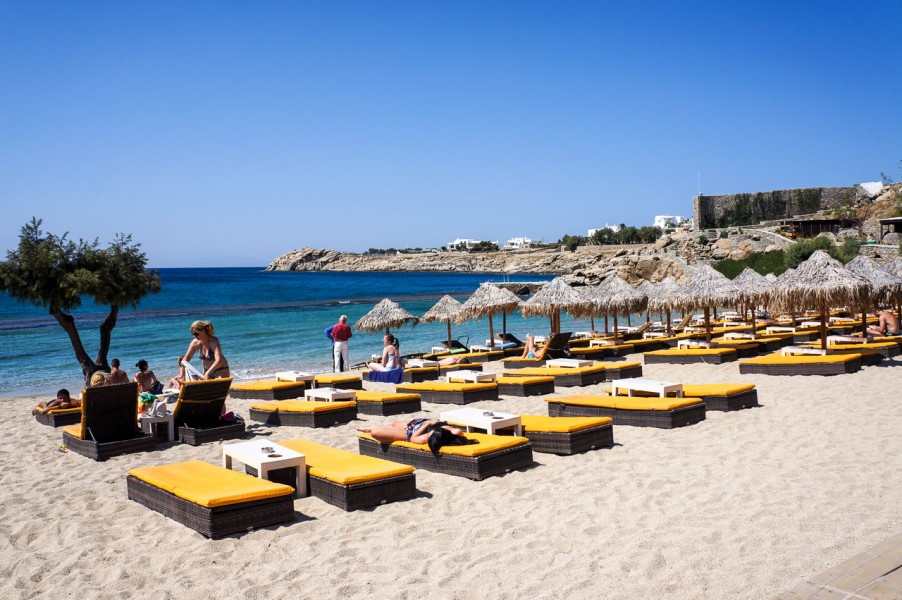 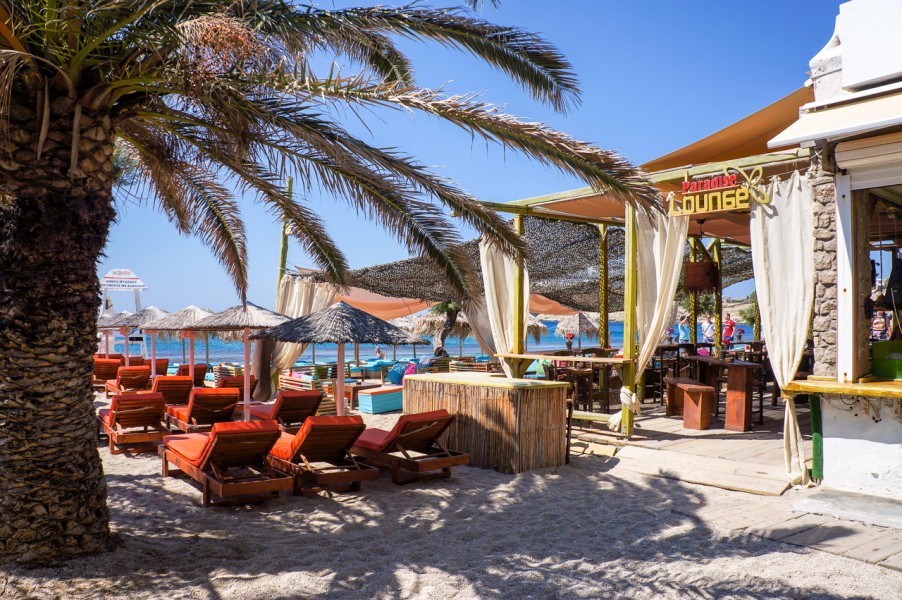 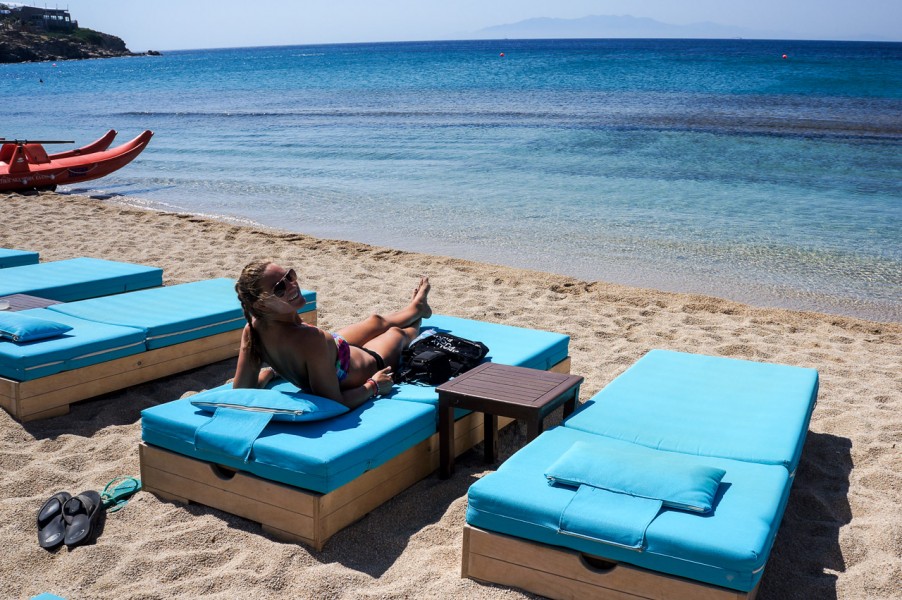 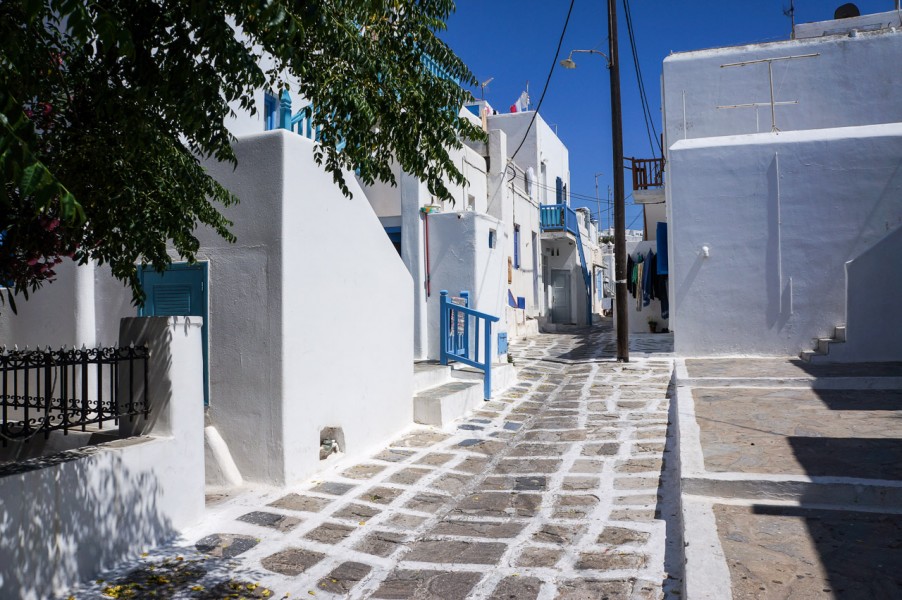 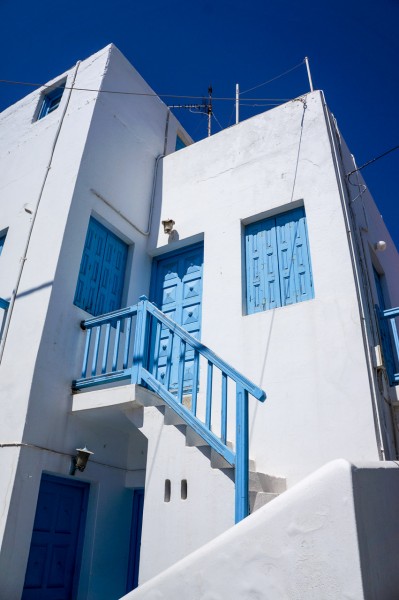 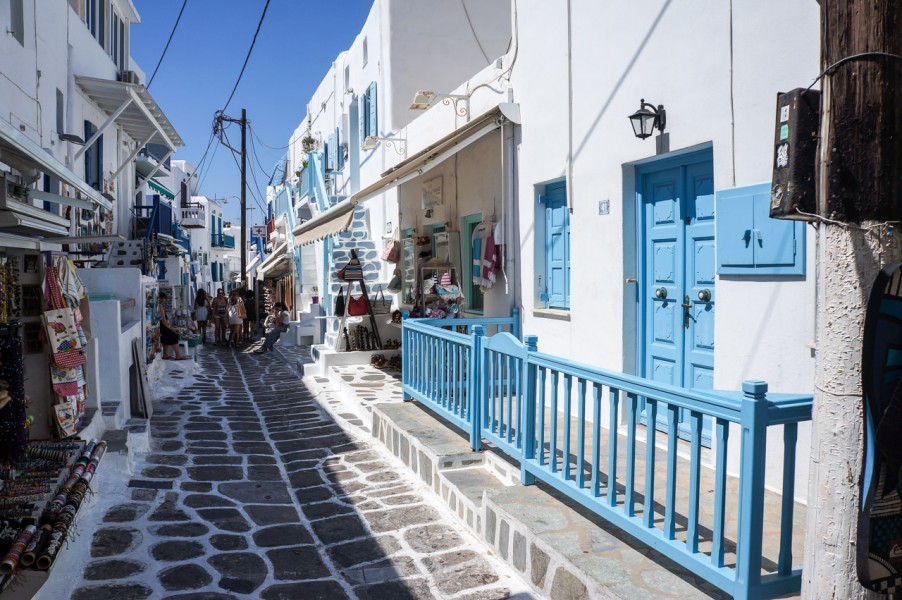 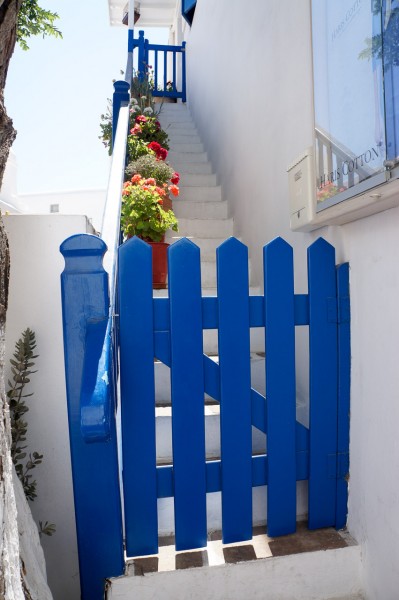 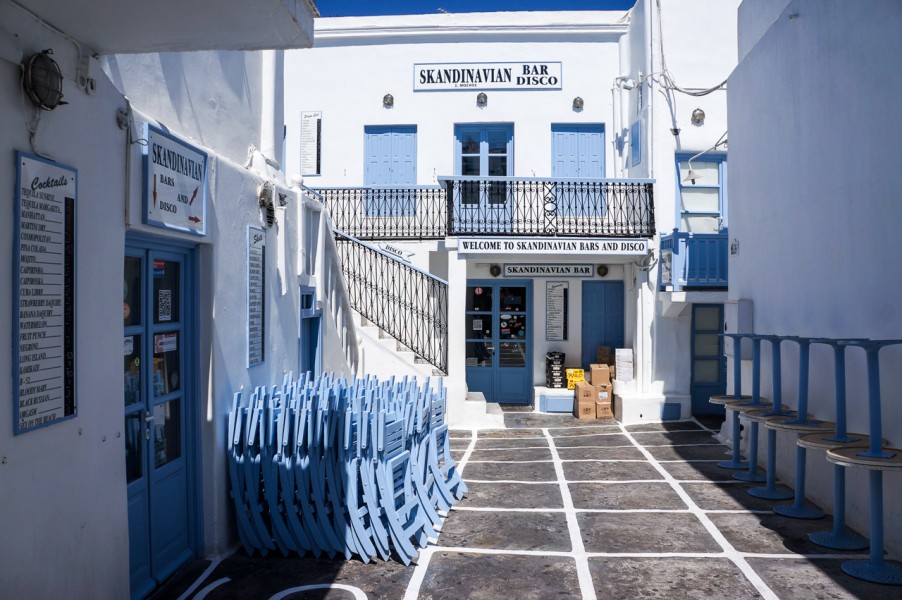 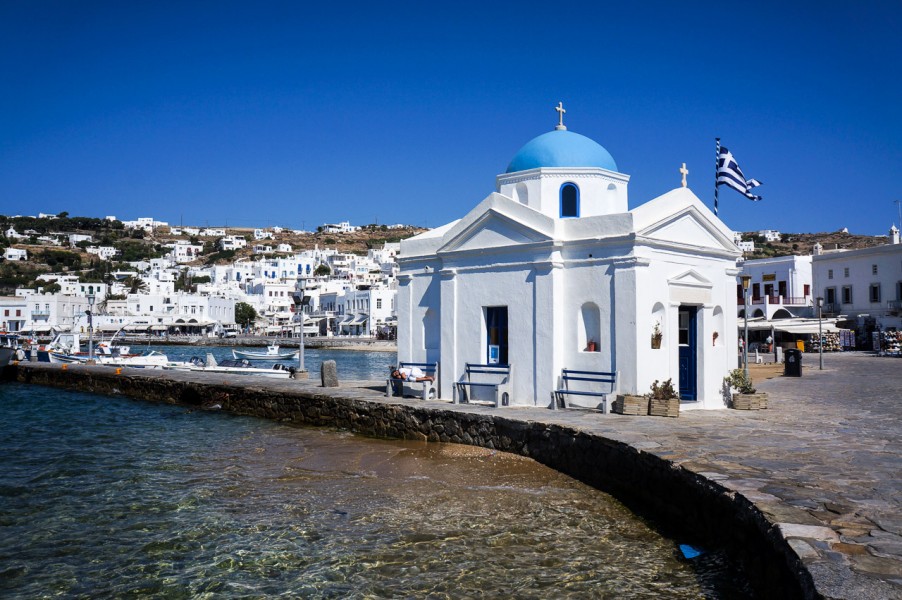 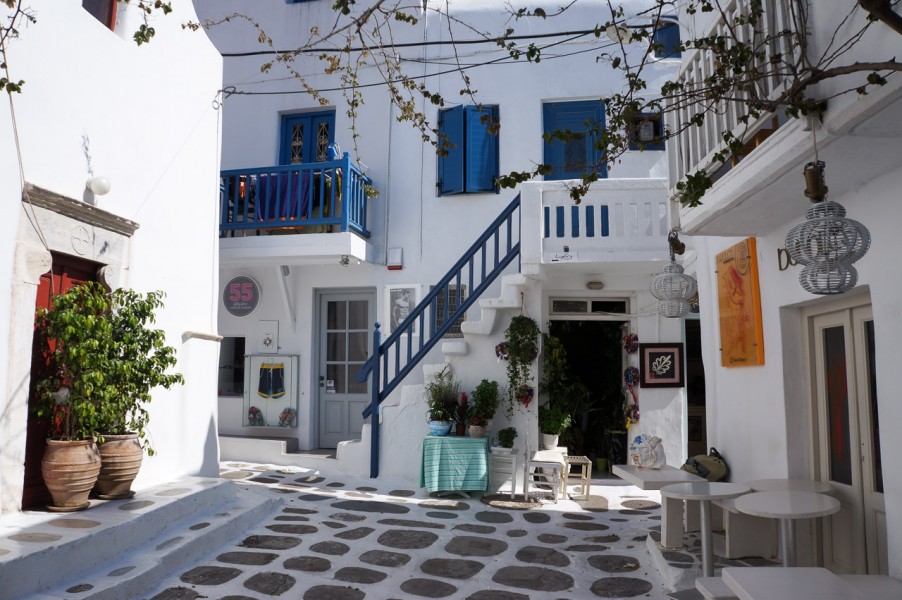 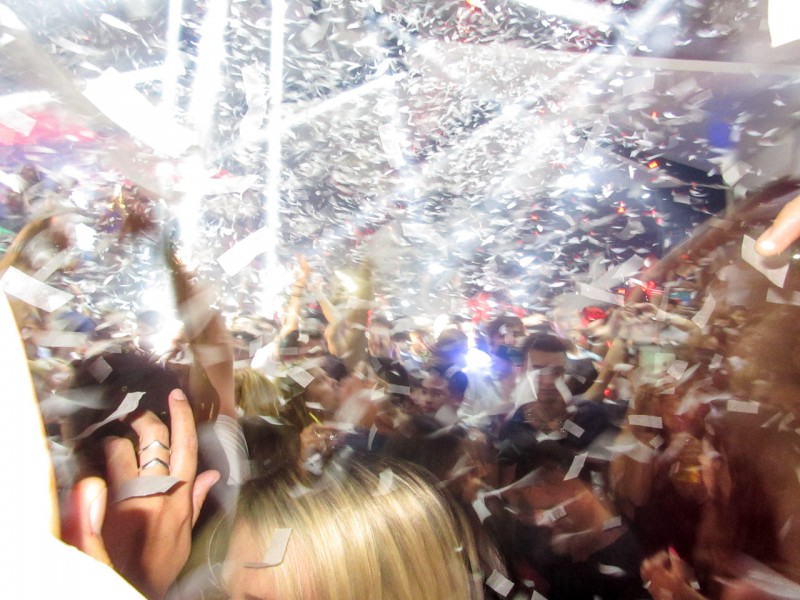 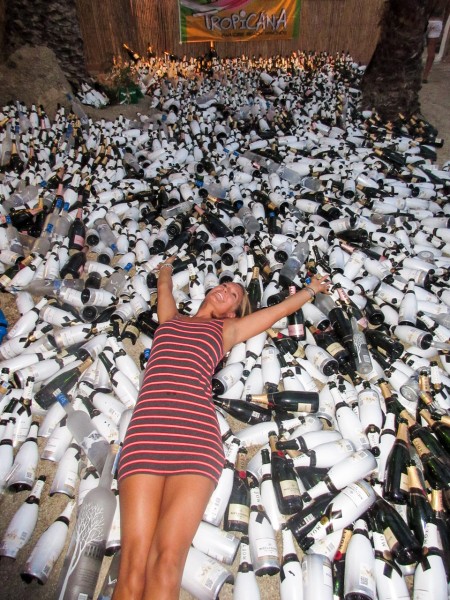